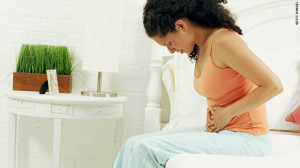 A 44-year-old man presented with generalized abdominal pain that he had been suffering with for close to 10 years, for no apparent reason. His bowel movements alternated between diarrhea and constipation, with the diarrhea being more frequent. His stools were often loose and watery, and were accompanied at times with intense abdominal pain that was either sharp, dull, or both. He also suffered from frequent bouts of nausea, and would get frontal headaches at least once per week.

His doctor had diagnosed him with irritable bowel syndrome, and had recommended seeing a nutritionist as well as trying medications such as loperamide and laxatives as required. The patient was amenable to making changes in his diet, but chose to seek acupuncture as a means of relieving his condition for the long term.

He was also having trouble sleeping – his dreams were very vivid and would cause him to wake up a few times each night.

His tongue was pale and slightly swollen, with some teethmarks on the sides. The tip of his tongue was reddish. His pulse was slippery and somewhat full in the Spleen position.

Diagnosis: Liver Qi Invading the Spleen and Stomach. Stagnant Liver Qi was evident with regards to the patient's abdominal pain, and the alternation between diarrhea and constipation. His Stomach was affected in terms of the nausea symptoms and the frontal headaches, and the Spleen was affected most obviously in the patient's pale tongue but also with the Dampness that showed in his swollen tongue and slippery pulse. The Liver also appeared to be indicated in the red sides of the patient's tongue, and in the sleep disturbance which may have been related more to the Gall Bladder, which is a sub-organ of the Liver.

Treatment Principle: Tonify the Spleen and smooth the flow of Liver Qi in an effort to help resolve the patient's abdominal pain, and help to regulate his bowel movements and make his sleep more peaceful.

After 2 treatments per week for 1 month with some adjustments to his diet, the patient felt much better. His abdominal pain had disappeared, and his bowel movements returned to normal. His frontal headaches had disappeared, and he even said that his sleep felt more restful. He came back once a month for the next 3 months to help solidify our work.