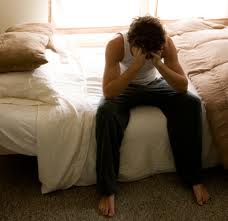 A 38 year-old male patient presented with insomnia. He said he had been having trouble sleeping since his divorce 2 years previous. He was having trouble falling asleep and was also waking up frequently during the night – approximately 3 or 4 times, and was not feeling rested. He also claimed to have been very depressed and sad since his divorce. He did not have any children with his wife, and had not been the one that chose to pursue divorce. He said that he was depressed and sad about his inability to repair the relationship with his estranged wife.

He also complained of frequently having dry eyes, and felt that his memory was poorer in the previous 2 years than it had been before his divorce. He also claimed to be in the beginning stages of feeling rather anxious and unsettled, especially in the latter part of the day around dinner time.

Although his concern was mainly for the insomnia, it was believed that acupuncture could help with the depression as well. Nonetheless, it was recommended to him that he also seek the professional help of someone whom he could talk to about his emotional state. He agreed that we would do so.

His tongue was red and dry, with a fairly thin coating. His pulse was quite weak, and was slightly wiry on the left side.

Treatment Principle: Tonify the patient's Liver and Heart Yin, and calm his Mind.

After 4 treatments performed once per week, the patient was able to fall asleep, but continued to wake up a few times during the night. His depression and anxiety seemed to be lifting as well, and after this first month had passed he began seeing a psychotherapist about his feelings surrounding his divorce. With a treatment every 2 weeks, in 3 more months he was able to sleep through the night, and seemed much happier.

Acupuncture for Insomnia and Other Sleep Issues