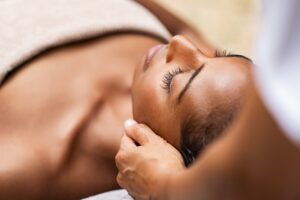 What is Trigger Point Therapy?

Trigger point therapy is considered the treatment of particular spots of pain or irritation on your body that are called ‘trigger points’. These points are in the fascia that surrounds your muscles and not actually in the muscles themselves, and because fascia connects everywhere in your body trigger points may have widespread effect. Although controversial in that science has yet to explain the phenomenon, trigger point therapy is widely used and often sought out as a means of relieving a variety of complaints, including:

Trigger point therapy is commonly used with massage therapists, chiropractors, acupuncturists, physiotherapists, and osteopaths. Therapists practicing the technique often talk about ‘referral patterns’, i.e. areas of pain which emanate from the trigger points themselves.Diagnosing the precise trigger point therefore may be difficult, but many have determined usual patterns that arise from common trigger points. For example, a trigger point in your deltoid muscle will likely refer pain down the lateral side of your arm.

Correlation to acupuncture points exists in that acupuncture in painful spots is often applied. In addition, many who practice trigger point therapy claim that simply ‘pressing on a painful point’ is not enough to create lasting, meaningful relief, and that finding the ‘correct’ points to treat is more important. This coincides with Traditional Chinese Medicine (TCM) practitioners who practice acupuncture, as they treat the body systemically as well and do not simplify complaints to individual spots. In addition, the concept of pain referring from a trigger point sometimes correlates with TCM meridian theory, which states that there are pathways or ‘meridians’ which run throughout our bodies.

Treatment varies with this therapy, although many will use the basic approach of identifying the trigger point, and then pressing on it to elicit a release of the fascia. The amount of pressure applied will vary, as will the duration of time spent on pressing the same spot. As well, your individual therapist may use their hands, palms or elbows, or even a variety of tools available to provide the desired response from your tissues. Relief does not often occur in the first treatment, and sometimes bruising may occur in more aggressive approaches.

In addition to manual therapy and acupuncture needles in trigger points, some practitioners may also or instead use injections, electro-stimulation, lasers, or even a variety of stretching techniques. The efficacy may depend on the practitioner, the patient’s particular complaint, or both.